How is Marriage Defined by 320 Million?

This summer’s landmark Supreme Court 5–4 decision that the fundamental right to marry is guaranteed to same-sex couples (re: Due Process and Equal Protection Clauses) has been the largest victory to date for LGBTQ equality. And, there has been, as we all knew there would be, expected push back in certain pockets of the U.S. Front and center in the media, Rowan County Courthouse Clerk Kim Davis continues to keep the definition of marriage a lively debate. As I’m sure you know by now, Davis cited God’s Law as her reasoning for refusing to follow the U.S. Supreme Court order, “To issue a marriage license which conflicts with God’s definition of marriage, with my name affixed to the certificate, would violate my conscience.”As of this morning Davis returns to work and removes her name and authority from the marriage licenses, in the hopes that the whole world will know where she stands. Her deputy clerks will continue to issue “unauthorized marriage licenses pursuant to a federal court order.” This apparent compromise suggests that Davis does not have to violate her beliefs, and that Rowan County Courthouse will be able to function properly under current federal law. By now you’ve also no doubt seen Planting Peace’s billboard illustrating one of many biblical definitions of marriage that have been culturally abandoned in the U.S. So how do religious and legal definitions of marriage play out in present day America? 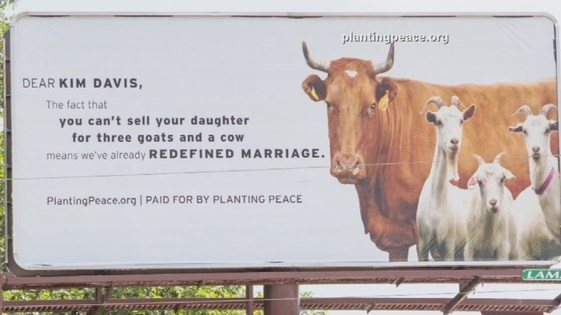 Billboard paid for by PlantingPeace.org. “[the] intent of the billboard is to expose this narrow interpretation by Davis and others that they use to defend their discrimination against the LGBTQ community.”

This is where the conversation gets interesting. While there are many historical precedents in the U.S. with the never-ending debate over “separation of church and state”, for the purposes of this post, the focus will (attempt to) be kept on marriage. Among all of the reactions you will read and hear in the media, it’s paramount to keep the following in mind: The U.S. has never recognized an official establishment of religion. Ever. Period. Does it then follow that the government will continue not to prohibit the free exercise of religion, unless it is conducted in such a way to violate the Establishment Clause? According to the Sixth Circuit U.S. Court of Appeals, having previously dismissed Davis’ primary argument that her religious faith should exempt her from licensing a gay marriage, I think the answer here is a resounding “Yes!”

When it comes to “the definition of marriage” the Kim Davis story forces us to consider which definition of marriage wins out, the legal definition or the religious one? Laws change in the U.S. and so does culture, and right along with it the ratio of the secular and theistic electorate. Attitudes about women’s rights have shifted, as have attitudes about interracial marriage, and on, and on. We live in a representative democracy. As of 2014, the Pew Research Center found that 70.6% of U.S. citizens identify as “Christian”, with the next closest being people who answered “none,” claiming no religious affiliation at 22.8%.

It should then be no surprise when people from other countries look at the U.S. as a Christian nation. But while there seems to be a healthy Christian substrate of the U.S., our state remains secular. Citing theistic definitions of marriage is appropriate in a place of worship; However, our society is not a theocracy. We are not Iran or Saudi Arabia. There are important reasons why we govern ourselves the way we do.

In order to really appreciate how the legal and cultural definitions of marriage have evolved let us look back beyond the scope of our own young country’s history. When we go back far enough, marriage was more about acquiring or maintaining power, rights, and/or transferring property or wealth via the bride and her dowry. Marriage also used to serve as a means of brokering alliances between families. In the 9th century, the Catholic Church overruled the old noble class and kings who wanted to have a second wife by defining marriage as “between one man and one woman.” 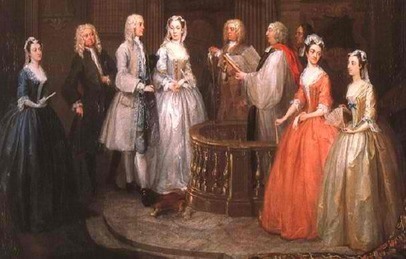 Painting of a New England marriage. Many marriage celebrations and customs of the New World were continued from the Old World.

If we come back to the U.S., and tad closer to present day, the State government didn’t weigh in on the definition until Massachusetts began requiring marriage licenses in 1639. Here again, the definition of marriage was still based in religious scripture. Much has changed in our country since then. For example, I challenge you to find someone alive today who agrees with the U.S. law making marital rape legal (a law that wasn’t banned in all 50 states until the 1970’s). Historically, men have enjoyed significantly more rights, privileges, and power in a marriage. After the civil rights and women’s liberation movements, gender-based roles became more flexible. Marriage became redefined by the dominant culture in the U.S. (a.k.a. the majority of its citizens) to be based on love, equality, and flexible division of household roles.

This isn’t to say that religion still didn’t have a significant influence on the definition of marriage; However, it becomes important to remember the point about the majority of public opinion. More times than not the majority culture sways U.S. Supreme Court decisions, as I believe it has in the Obergefell v. Hodges case. But it’s not always this cut and dried. One doesn’t have to think too far back to the unanimous Supreme Court ruling on Brown v. Board of Education where only 55% of the public approved of the decision. The fact of the matter is that the majority of Americans support the Court’s decision regarding the legal definition of marriage. The numbers get even larger when you talk to Americans under 30.

It’s important to keep talking about this. No matter what side of the debate you fall on, shining a light on this issue is a good thing. Here in the U.S. members of the LGBT community continue to face challenges which are at best frustrating, and at worst dangerously terrifying. It’s also important to remember that right now, there are 76 countries where it is illegal to be gay, 10 of which can punish their citizens by death for who they love.

The Kim Davis story is one of many versions like it, that can serve as a reminder to all citizens of the U.S., religious and non-religious alike, that if you are going to work for the federal, state, or local government, you are going to have restrictions placed on how you perform for your employer. You are restricted to which health insurance plans you can choose from, which retirement accounts you can enroll in, how long your lunch break is, and how much leave you can take. And, because you are a public employee, you are in fact prohibited from the free exercise to impose any religious beliefs on others where it prevents you from fulfilling the responsibilities of doing your job.

Disagreement is good. Respectful debate is healthy. This is what it means to participate in the free exchange of ideas. I love my country. As a therapist, listening for understanding is my job. Please weigh in on the comments section, I’d love to know your thoughts on this matter!

How to Use Tools of Diplomacy in Your Relationships

What do international leaders and personal relationships have in common? Both can benefit from implementing tools of diplomacy to prepare for when conflict arises. Practice makes perfect and working with professionals who offer couples counseling can provide the support and guidance you need to start building loving and caring connections.