“The greatest gift you can give your child is a strong relationship between you and your partner.”

What is the Bringing Baby Home Program About?

Even couples with strong and loving relationships are challenged during the transition to parenthood. Sleep deprivation (oh yes, it is real), unfinished chores (like that unfolded laundry on the couch), changing financial demands (another mouth to feed), all the signs that can create profound stress and a steep drop in relationship satisfaction – all of which takes its toll on baby’s care. Not surprisingly then, 69% of new parents experience relationship conflict, increased depression, decreased quality of the parent-infant interaction, disappointment and hurt feelings.

Goals of the Couple's Workshop

Objectives of the Couple's Workshop

Participants will be able to:

John Gottman began his research on couples having children in 1985, following 20 previous years of research on couples and marriage. The Bringing Baby Home Study began in 1999 as a small pilot study designed by John M. Gottman, PhD and Alyson F. Shapiro, PhD. This study later grew into a full-scale research evaluation that was concluded in 2005, when the youngest of the research participants was 2 1/2 to 3-years-old. The BBH program has been evaluated through random clinical trial research involving 159 families. Each family was randomly assigned to one of three groups. One group received both a two-day BBH workshop and subsequently, attended 12 weeks of a support group. A second group only received the two-day BBH workshop that they attended shortly before the birth of their baby. The third group, the control group, did not receive either the BBH workshop or the support groups. The control group was offered the workshop following the completion of the study.

By following these new families over the course of three years, Gottman, Shapiro, and colleagues have determined the effects of each BBH Program component on familial and parental relationships, and ultimately, on the developing children. As a result of this research, The Gottman Institute has developed the BBH Program which includes the Couple’s Workshop, the Program Sections, Support Groups, and the Beyond Bringing Baby Home Program. Each of these tools is being used to make the research findings available to the public. 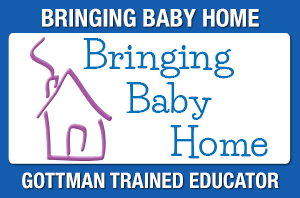 Robin Smith is a certified Gottman Educator authorized to present the Bringing Baby Home Program for new and expecting parents. This program can be incorporated into individual and couples treatment.