You Are Never Alone. You Have a Family Inside of You.

I’ve written before on the blog about Recognizing the Importance of Self-Talk, but nothing comes close to what you’re about to learn. I wasn’t prepared for it either. I signed up for a 16 hour training on Internal Family Systems or IFS that completely revolutionized the way I help my clients. It changes how I interpret that article on self-talk I wrote back in 2019. Frankly, it has transformed the way I relate to myself and others. And (at the risk of losing some readers at the top), I wanted to share with you the 3 Disney/Pixar movies I associated to while learning about this model of psychotherapy to help us break it down.

When you talk to yourself (either out loud, or thinking inside of your mind), you are having a dialogue between You and another Part of you, right?

You say to yourself, “Where are my keys?”

Who are you asking? Are you asking the Part of you that remembers where the keys were placed?

Who is the One asking to find the keys? Surely it’s you. Right? Or, might it be the Part of you that is anxious that you’ll be late?

Here’s the claim: The nature of the mind is naturally multiple – many Parts are inside of you. You think you’re driving this thing, but many times, it’s a Part that’s actually in the lead. Your Parts are full-blown sub-personalities. Did you notice how the different Parts (Joy, Disgust, Anger, Sadness, Fear) inside of the family member had different emotional states? This is exactly how your emotions are built. When you’re angry, one way to look at the experience is to think and feel, “I’m angry.” But it’s really an angry Part that has taken over. It’s way more than just an emotion. The angry Part has thoughts, feelings, and beliefs just like you do. It’s an entity in your inner world.

Now at this point, you might be wondering, “When I get angry, my angry Part has ‘taken over’, but taken over from whom?”

Here’s the second the claim of the model: There is an ecology of Parts in the mind, and when these Parts step back, relax, and trust you enough to relinquish control, you are the calm, curious, compassionate Self that is underneath or behind all of the mind’s Parts; And you, the Self, can dialogue with these Parts. Cue my second Disney/Pixar clip from Frozen 2 (2019) where we see Elsa asking to make contact with something that is inside of her (one or more of her Parts).

Some folks at this point might be associating to what used to be called multiple personality disorder or MPD – what is now called Dissociative Identity Disorder. But DID is merely the extreme end of the continuum of what is naturally occurring in the mind. This claim that you are not a unified Self can be a little disorienting, or even frightening to some folks. Especially as our culture tends to think about hearing voices as pathological or “going crazy”.

After all, historically, our society has involuntarily hospitalized many individuals with disorders like schizophrenia. The notion of being committed against one’s will is terrifying. For more on IFS’s take on disorders like schizophrenia, depression, and OCD, check out Ben Blum’s article in Medium’s health and wellness publication, Elemental, Inside the Revolutionary Treatment That Could Change Psychotherapy Forever.

The 8 C’s of Self-Leadership

But this claim actually holds up – as long as your skeptical Part is willing to step back and give your natural curiosity a fighting chance to experiment with this framework. Underneath of all personalities there is a solid Self, which, for all intents and purposes, is built with the following 8 qualities (which all happen to begin with the letter C to make it easier to remember). These natural qualities are:

Other ancient human traditions acknowledge these qualities within each human being. Within the Christian faith tradition, the Self is defined (Galatians 5) as “the fruit of the spirit” having: love, joy, peace, forbearance, kindness, goodness, faithfulness, gentleness and self-control. For those that may be interested, author of Altogether You (2020), Jenna Riemersma does a wonderful job mapping IFS onto the territory of Abrahamic scripture. 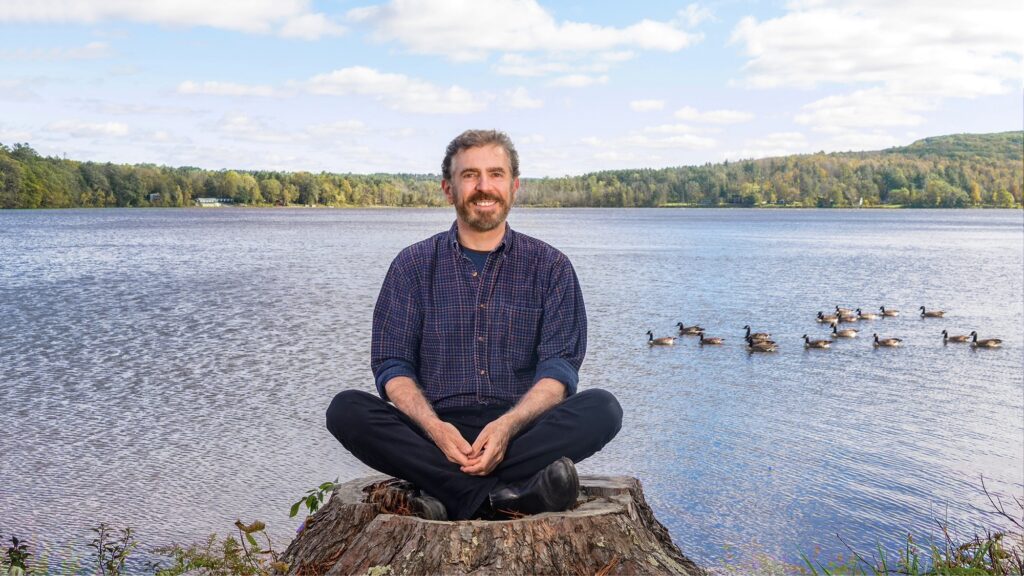 Award-winning author, meditation teacher, and psychotherapist, Loch Kelly describes how other wisdom traditions like Hinduism, Buddhism, Therav?da look at the Self as having similar qualities that he has synthesized into what he calls the 11 I’s of Self-Essence:

Now, this picture of the Self obviously doesn’t capture the full territory of human experience. These are all noble traits to have, but you and I both know that we humans are capable of committing terrible acts. We have Parts of us that can obscure these natural qualities. But to be clear, I’m not saying the Self is good, and the Parts are bad. I’m not saying that at all. In fact, there are No Bad Parts.

the psychoanalysts understood that we are not masters in our own psychological house. The Greeks conceptualized these Parts of the human psyche as gods.

The English philosopher Thomas Hobbes is well known for regarding human beings as essentially bad or evil, whereas Genevan philosopher, Jean-Jacques Rousseau puts forward the opposing claim that human beings are essentially good. Hobbes and the many other Christians like him who view human nature as, at bottom, sinful, are – without realizing it – referring to some of these other Parts of us.

Now, IFS doesn’t hold a copyright on the claim that every Self has Parts. Before the 1980s when Dick Schwartz was discovering and developing this model with his clients, well-known family therapist, Virginia Satir was helping her clients find more integration with their Parts using her technique called the Parts Party. The psychoanalysts understood that we are not masters in our own psychological house – there are unconscious forces at work that drive our behaviors. The Greeks conceptualized these Parts of the human psyche as gods – thinking of getting angry as “being possessed by Ares, the God of War”.

No one knows how many Parts there are. From a therapeutic perspective, it doesn’t really matter how many Parts we have. It’s the relationships between the Self (that’s You), and your Parts – AND the Parts with one another that really matters when it comes to your overall psychological health. Let’s say, for example, that a person tries to dialogue with their Angry Part; But they, themselves are feeling scared of the Angry Part. It’s actually a Fearful Part that’s “doing the looking” at the Angry Part. When a person can ask their Fear Part to step back and trust them to be in the lead with this Angry One, then the Angry One changes from looking scary, to looking like a normal sized being. 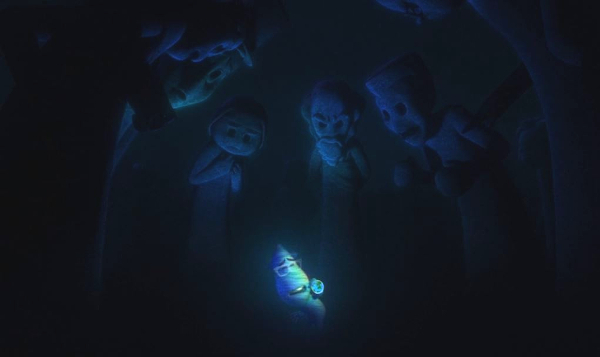 This brings me to my third and final Disney/Pixar clip, from the movie Soul (2020) in which we see the main character, Joe Gardner trying to communicate with a being and getting something that presents as scary in response – you have to watch the whole clip to see the scary part. When Joe approaches the being with calm, curious, compassion, the scary Part actually shrinks back down into a normal sized being.

Embedded playback has been disabled, so here is the link – https://www.youtube.com/watch?v=nmapZFDUkBk

Some version of this is what my clients tell me happens in their minds when they are in that Self state (the first 3 of those 8 C’s of Self) and interacting with a Part. All Parts, no matter how vicious, scary, evil, etc. they may present, are actually well intentioned, good beings at their core.

Is Your Skeptical Part Getting Activated Yet?

Now, for you skeptics out there who don’t want to waste your time with mystical mumbo jumbo that aren’t backed by science, please hang in there. I promise it’s worth discovering for yourself. IFS is essentially the Western, 21st century equivalent of shamanic healing. I don’t want to take anything way from Dick Schwartz’s development of the model, because I’m grateful to him for bringing it to our current context. But I honestly don’t think of it as cutting edge; It’s more of a rediscovery of old technology brought into 21st century Western culture, that is now being validated with empirical clinical research trials.

If you’re skeptical – and you have every right to be – let me give you some fodder to chew on. Let’s start with subjective investigations; that is, what’s experienced inside of your ego boundary:

My guess is that one or more of the above resonates with you.

Now let’s look over some of the objective investigations:

Classically, as a family therapist, I was trained to focus on the interactions between members of a family unit, and help them cooperate to bring about change so that they suffer less, and the well-being of all members of the unit experience more healing and flourishing. IFS takes some of these principles of family therapy and brings them inside of the individual family member.

For example, A family therapist might look at the interactions between family members, how they communicate with one another, how they react emotionally to what the other person says or does, exploring fears, trust injuries, and a whole host of other important information. IFS takes all of this phenomena and brings it inside of a person’s psyche. You may have Parts that don’t trust you. And you more than likely have Parts that you don’t like.

So this Self exists in an ecology of and in relationship with many Parts of Self. It’s a big ole’ family in there. And remember from my last article, just because the Self is an illusion, doesn’t mean that this ecosystem isn’t real. I have begun to use this model with my clients, and it is unbelievable. It’s hard for me to believe, and it’s hard for my client’s to believe. But it’s true. It works. And it’s very much worth it for your skeptical Part to be taken seriously and treated with respect.

I am sure I will write more on IFS, but for now, if you’d like a much more in-depth look into the model, please visit ifs-institue.com