Why Racism Has Persisted, and Why We Need to Look Beyond Politics to Heal Our Divide 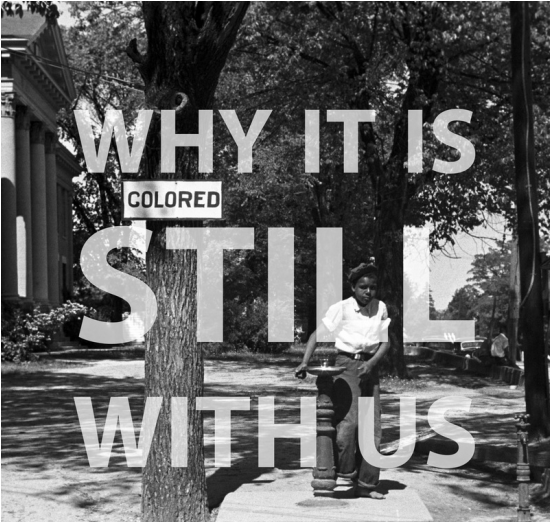 After a week where many in the country are left shaking their heads, wondering why we can’t seem to do a better job healing our country’s long standing racial divide, the question lately being asked in this political season is, “Which presidential candidate will do a better job on this issue, Trump or Clinton?” Frankly, the question is aimed in the wrong direction. One president has not, and can not make the difference needed on this issue. Change must come from the greater society writ large, regardless of who we elect. Let’s look to the very beginning of our country’s founding to unpack this.

How Our White Forefathers Saw Blacks in a Burgeoning American Democracy

The original sins of inequality and discrimination were written into our country’s very founding document, the Constitution, which sanctioned the enslavement of Africans through the three fifths clause and the fugitive slave clause. A little under a century later, the majority of our society (still predominantly white, thus enjoying the claim to the country’s dominant culture) would still subscribe to the belief that whites were superior to blacks. Lincoln, who reinterpreted the document’s phrase, “All men are created equal”, who “emancipated” the slaves, still didn’t think blacks and whites deserved the same social and political rights.

Even as the minds of some whites were changing, mainly in the north, under president Andrew Johnson’s administration, southern states could legally enforce their own black codes, including apprenticeship laws which forced many blacks into unpaid labor for white planters. Even when blacks were granted the vote in 1870, elections were manipulated by those in power (still white men, and still happening today). In 1896, under president Cleveland, states like Louisiana, Alabama, Mississippi, Virginia, and South Carolina enacted grandfather clauses to keep former slaves and their descendants from voting. As it was in the 1700’s (and before), whites continued to see themselves as superior to blacks.

There are those still alive today who watched as President Lyndon Johnson managed to influence congress and get the Voting Rights Act passed in 1965, yet still the racial divide persisted. Many whites still believed that blacks were inferior. Obviously there has been progress these last five decades, that cannot be denied. In 2016, President Obama spoke in Dallas after the killing of five police officers by ex-army reservist Micah Johnson. The mass shooting was provoked by the killing of two more black men at the hands of the police. “We are not as divided as we seem,” he said. I really want to agree with that sentiment. 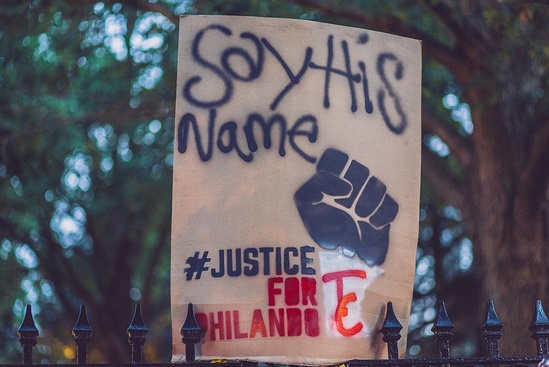 The Incontrovertible Fact Remains, We Are Still Divided

The illusion of white superiority is a stain that our collective society hasn’t been able to wash out, yet. American hopefuls wanted to wish away racism in the 60’s. They wanted to wish it away in 2008 after electing the first black president. Obama himself would like to be able to wish it away today – but he knows he can’t. He alone cannot wash out the stain, nor Trump, nor Clinton. We the People, must do the work. We must go out of our way, out of our comfort zones, to have honest conversations about race – and here’s the important part – with people who do not look like us. We must not let our pride, nor our shame continue to hold us back.

People will want to use statistics to support their argument for or against the claim that we still live in a society that, not only favors whites, but systemically subjugates non-whites. It is important to look at how racism can be quantified. Right now, someone reading this article who strongly disagrees with my argument can easily Google search their own version of quantifiable statistics that will bolster their argument and show me how wrong I am.

But I want to look at the qualitative data as well. I want to shine light on the true stories that far too often remain untold. I didn’t find out about “The Talk” until I was in graduate school at age 27. Why? Because I’m white. My dad had a talk with me about driving and how to be respectful to police officers if I got pulled over, but it ended there. Please, watch this video from back in 2012 around the time of Trayvon Martin’s death, where our own NBC4 Washington’s Jim Vance talks about his Talk with his son.

While you’re at it, please watch Jelani Cobb interviewing members of the Newark, NJ police force in this must see Frontline documentary, Policing the Police.

What Everyone Needs to Understand About Race

We’ve come so far, and racism is ever present in our society with tensions seeming to rise higher and higher in this political season. Oppression is still with us. Why? The answer lies in the word discrimination, and it’s more complicated than you might think. Let’s explore why racism is still with us, and why I am hopeful that we can be the change we wish to see in our world to end it, not by depending on our political leaders to make big changes, but by taking small and significant actions ourselves. Enough tiny droplets of water make a gigantic ocean. Let’s start at the beginning.

If you subscribe to the widely accepted “Out of Africa” theory of human origins, as most rational individuals do, then you know that anatomically modern humans showed up in North/East Africa around 250,000 years ago. You would therefore, then, subscribe to monogensis, which claims that there is a common descent for all human races. So how did our ancestors change skin color, leaving us with the diversity of races we have today you might ask? Have you ever thought about the correlation between where generations of humans live relative to the equator, and what color their skin is?

When our ancestors migrated out of Africa to more northern latitudes (100,000-70,000 years ago), they were exposed to less sunlight, partly because of the actual amount of daylight in the sky, and partly because of covering their skin due to colder climates. Less exposure to sunlight means less vitamin D production. You can then intuitively understand why evolution would select out darker skin, that doesn’t allow for the production of needed amounts of vitamin D for the organism that is in an environment with less sunlight.

I realize that I’m beginning to “Nerd Out” here a little too hard, but are you with me so far? Here’s the map of the world showing skin color relative to latitude:

Why We Treat One Another Differently Based on Skin Color

Ok, so we know why and how, we as humans have the diversity of skin colors that we do today. What about why we treat one another differently based on skin color; after all, this article is about racial oppression in 21st century America, right? Before we even get to human behavior, we need to understand some basics about primate behavior, because it helps to explain how we as humans think and act towards one another. Remember, we’re African Apes (do me a favor and respectfully remind your racist relative at Thanksgiving of this truth, would ya?):

Now I realize that I am generalizing here, and yes, Chimpanzees (which we are most closely related to genetically) do have friendly encounters with outsiders from other troops, but genocidal violence is not particularly uncommon.

Humans, just as others in the Order of Primates, evolved to live in groups, and as a result, developed associations between the humans that belong to our tribe (troop), and the humans that do not belong to our tribe. So we need to look at skin color as just one facet of many different ways in which our species has learned to discriminate between ourselves. Discrimination on the basis on skin color has persisted so long because of it’s evolutionary advantages.

Discrimination is a valuable tool. It is how we determine which mushrooms are safe to eat, which snakes are poisonous, and yes, which people “belong” in our tribe. Members of a different group could potentially harm in-group members by spreading disease, killing or injuring individuals, or stealing resources. We can then see why it becomes important to be able to quickly evaluate who “belongs” to “our group”, and who does not. This makes intuitive evolutionary sense why discrimination has stuck around in our behavioral genome. 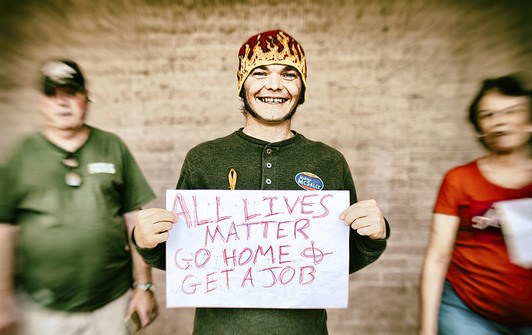 The Key Difference Between Discrimination and Racism

So we can understand why humans have diversity in skin color, and why discrimination is deeply seeded in our DNA. But keep this in mind, racism requires discrimination, but discrimination does not require racism. To make sense of how the social problem of racism and prejudice was born out of human being’s nature to discriminate, we must first consider how discrimination applies to tribalism in human societies. Like our primate ancestors before us, we naturally categorize people as either belonging, or not belonging to the “in-group.” When in-group members evaluate out-group members as being inferior to the in-group, this is where the ugliness of racism takes root. This is where oppression begins.

In more modern societies, when two different cultures clash with one another, each culture makes an evaluation of the other – again – we first discriminate on the basis of “difference”, we then make the evaluation of “superior/inferior”. This phenomenon plays out at every societal level. Watch one of my favorite speakers on this issue, Jane Elliott as she lays out the mechanism for how racial bias gets delivered – it reminds me of that wonderful song from South Pacific, “You’ve Got To Be Carefully Taught”.

Now there may be plenty that I am missing here, because I am white, and I welcome your input, feedback, and reactions to this article in the comments section, on social media, or via direct message. Let me bring this home, because, after all it is 2016 and most internet users won’t have gotten this far. Yay You!

It is in our nature to judge people before getting to know them. As I see it, police have a really hard job to do, and they go out and face dangers every single day. Their occupation requires them to be hypervigilant and on guard, trained to assess the level of threat in a given situation. Only recently have they been trained to look inwards and evaluate their own internal threat levels. Effective training programs need to help officers see their own unconscious racial biases as they play out in the field of duty. An officer associates Black with Bad/Dangerous/Criminal not because the officer is necessarily a racist, but because the officer grew up in America. You know, that country with its system and collective culture that has been built on racial oppression? And it’s got a longer shelf life than any of us ever imagined.