The Science Behind Motivation

What makes a person motivated to do something? This, it turns out, is a very complicated question to answer. I came across a somewhat thorough article in Psychology Today outlining the basic theories of motivation that I encourage all of my readers to skim through before continuing with this article. Come back to us after you’ve read Susan Krauss Whitbourne’s article entitled Motivation: The Why’s of Behavior – From instincts to self-actualization: What motivates us?

Ok, welcome back. Did you notice anything missing from that piece? How might we apply any one of those theories to the motives of a serial killer? A radical jihadist? Dr. Whitbourne comes close to mentioning a person’s beliefs in her outline of Cognitive Theory where she talks about a person’s expectations. But something missing in this equation is how a brain develops and what it is subjected to. How might a traumatic brain injury (TBI), or childhood abuse, or even adult onset mental illness influence what motivates us? I ask these questions because they directly relate to how a person thinks and what a person believes in the context of their behavior. A motive, by definition, is a hidden reason for doing something, and I would argue many times these reasons are hidden from ourselves; in other words, we are not conscious of why we are engaging in many of our behaviors. Now if this troubles you as much as it does me, then I invite you to read on.

How Our Beliefs Influence Our Motivations

Let’s look at how beliefs are the common thread that unites all 7 theories in Whitbourne’s article. Instinct Theory talks about how we are motivated to take an action based on our instincts. It can be said then, that an instinct is merely a belief that is hardwired. The wetware that is our evolved mammalian mind has been programmed to believe that fire is dangerous. I would submit that Drive Reduction Theory and Arousal Theory are attempting to explain the expressions of conscious and unconscious beliefs in the organism. As a conscious example, take the 6th grader who is very self-aware (perhaps too much so) in realizing that she feels totally awkward at this school dance – she believes it is safer outside of the gym from the prying eyes of the boys on the other side of the basketball court – and needs to leave the gym to regain her composure; thus, she is reclaiming her state of homeostatic calm. Contrast this with the unconscious example of the 24-year-old who is scratching his wrist anxiously, more or less unaware of this behavior as his team has 48 seconds to score a goal. He is attempting to stimulate a different part of his body to draw energy and attention away from his irregular breathing and preoccupation of victory. The unconscious belief at work here is that scratching his arm will aid him in returning to homeostasis.

Incentive Theory relates to a person’s beliefs that, if we value external reinforcement (i.e. money, food, sex, praise, etc.), we will act in ways to get more of what we value. Again, these actions are based on the beliefs and expectations that these things are, and will be “good for us”. Cognitive Theory states that our expectations guide our behavior. The important distinction between an expectation and a belief is that a belief is the psychological acceptance of a claim as true, regardless of any empirical evidence, while an expectation is the state of expecting or looking forward to an event that is about to happen. Self-Determination Theory argues that both intrinsic and extrinsic rewards motivate behavior, and that acting in ways in which you feel you are most in control of your behavior will be the most rewarding. This theory is, of course, operating on the assumption that you are actually in control of your choices – more on freewill and determinism later. 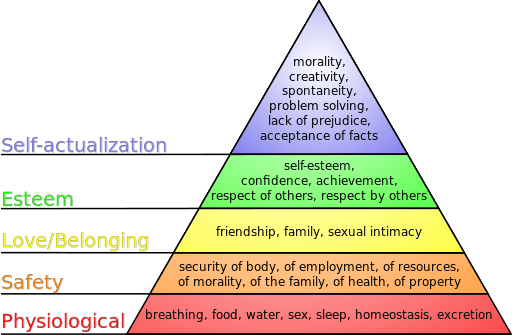 Maslow’s Self Actualization Theory really seems to combine many of the other theories suggesting that we are always trying to satisfy physiological and psychological needs, but that some of us get stuck in the pyramid as we are not afforded the opportunity to look past the next meal; Or perhaps one lives in war torn Syria and would ponder the fulfillment of one’s own full potential were it not for the pesky 24/7 job of being hyper-vigilant to keep one’s self and one’s family safe in such an environment. One is thus acting on what one believes to be of the utmost importance of the current moment, be it food, water, security, intimacy, etc.

Now as I said before, I believe that what motivates a person has much to do with his or her own neurology first and foremost. Take for example Charles Whitman, the infamous clocktower gunman who killed so many at the University of Texas in Austin, who requested in his own suicide note an autopsy be done on his brain, because he couldn’t make sense of his own thinking. Ned Gaylin, professor emeritus in the Family Science Department of the School of Public Health at the University of Maryland (my graduate school) was known to have said to his students, “Biology before psychology” in explaining a person’s behaviors. I couldn’t agree more.

What activates the fight/flight response for one person may not for another, based on the individual’s neurological system. The construct of each person’s brain may depend on genetic factors and historical experiences that one person’s nervous system may have had that another’s did not. For example, two people are walking down the aisle of a grocery store; one is quite content looking for her shredded wheat, while the other is nervous about what’s around the corner of the aisle because he cannot see whether there is a threat there or not. This could be because of mental illness, PTSD, or perhaps a brain tumor. 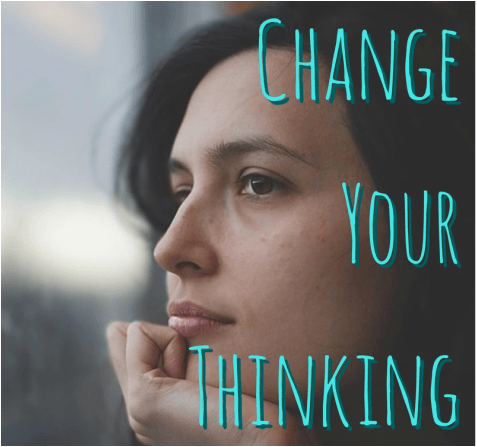 Change the Way You Talk to Yourself

Now, I always try to have some form of practical, useful tips and tidbits to give my readers on the topics about which I write. You can change your motivation by changing your beliefs about yourself. When you encounter a difficult situation, say, a fight with your partner, you may be thinking to yourself, “I’m angry – I’m frustrated.” If you change your inner monologue or self-statement from “I’m angry” to “I feel angry” you have just changed not only how your brain will respond to the event, but also where in the brain the blood flow will occur. This is because “I am angry” is a statement about your identity which implies the belief about the permanent nature of anger in your identity; whereas saying to yourself, “I feel angry” is a statement about your emotional state which is fleeting (not permanent), thus shifting blood flow away from the limbic system and major muscle groups (areas of the body that get activated during fight/flight), towards the prefrontal cortex, an area in the brain responsible for empathy, problem solving, and self-monitoring.

Furthermore, (linking back to Self Determination Theory) we can add a layer of perceived control over our event by further changing the language we use when we make a private self-statement. Rather than thinking to ourselves, “I am frustrated” or “I feel frustrated”, we can think, “I’m doing frustration.” This creates the belief that we are in control of the emotion, and therefore by doing frustration, it implies we can stop doing it. You have now switched over to the pre-frontal cortex, the heartland of problem solving. Now you can solve the problem of the negative emotion. This mental gymnastic skill can also be applied to positive emotions. For example, saying to yourself, “I’m motivated”, “I feel motivated”, or “I’m doing motivation” will each yield a different result in your brain, and each has different amounts of staying power. The statement that makes a claim about your identity is likely to have the most power – “I’m motivated!” The statement about what you are doing, just communicates to yourself that you will eventually stop doing that. Geoffrey James wrote a great article for inc.com outlining these very phenomena in more or less the same way.

Related Articles:
How We Become Stuck in Dysfunctional Habits: A Guide to Getting Unstuck
Motivation – Tips on Getting Started
The Science of Happy Couples