Reflections on Pride Month: Measured Progress in the LGBT Community

As Pride Month comes to a close, I sit reflecting on the state of the movement. I reflect on my own relationship as a straight ally to the LGBT community, thinking on the progress that has been made as well as the honest look at where we’re at. The unsettled feeling is, of course, still with me as I acknowledge where our society is, in 2016.

Still with us, is the “Misunderstanding American”, those subscribing to a religious doctrine that defines what a homosexual is (or what you deserve for homosexual behavior), the “Silent Ally American”, those who intellectually understand and support equal civil rights, gender equality, and the LGBT movement, but do nothing to challenge homophobia, biphobia or transphobia, and of course, at our very worst, the “Radicalized Hate-filled American”, those willing to take extreme acts of pure hatred on lesbian, gay, bi, or trans people in order to ‘cleanse’ or ‘correct’ society.

We have come a long way since the Society for Human Rights formed in 1924 in Chicago (the country’s earliest known gay rights organization. 1948 gave us Sexual Behavior in the Human Male thanks to Alfred Kinsey who helped to shape our understanding of the continuum of sexual expression. The Stonewall Riots of 1969 forever transformed the gay right’s movement. In 1973, the American Psychiatric Association removed homosexuality from it’s official list of mental disorders (Gender Dysphoria, by the way, is still in APA’s DSM-V). Harvey Milk becoming a board member in San Francisco in ’78, Wisconsin outlawing discrimination on the basis of sexual orientation in ’82, Vermont pioneering the way for civil unions in 2000, Massachusetts legalizing same-sex marriage in 2004, Obergefell v. Hodges in 2015, among many many other historic events mark our nation’s progress.

And, we still have the Houston Equal Rights Ordinance getting repealed last Fall. We still have HB2 in North Carolina this Spring. And before Summer could give us another disappointing reminder of the reality of where the movement is, we had the deadliest mass shooting in American history in Orlando with 49 slain (Virginia Tech being the next deadliest). This movement has had joys and sorrows, victors and victims. And it needs more ordinary people like me and you.

As I write, I think what this article is really about, is a call to action for more of the Silent Ally Americans to wake up and recognize that you are needed. I’ve been a Silent Ally for the majority of my life. There is power in numbers, and I believe the LGBT community has the numbers if the majority of Silent Allies turn into Real Allies. Take action to challenge the poisonous phobias, question the individuals complicit in perpetuating religious teachings that are out of step with the morals of the 21st century, and speak out against legislation that fails to protect marginalized minority citizens. 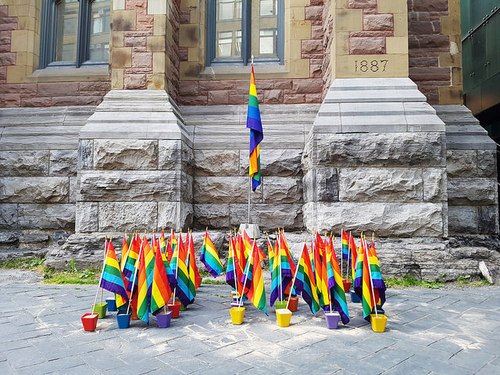 Yes, as I reflect on the closing of Pride month 2016, I am reminded of why Pride is so important for the LGBT community (and its allies) to exercise. People who say the fight is over because gay marriage is legal are entirely out of touch. Yes, society is shifting, and pop culture has influenced our greater society at large (think “That Certain Summer”, “Hot l Baltimore”, “Philadelphia”, “Will and Grace”, “Modern Family” and so on). But amongst all of the progress, we are still in the company of the Misunderstanding American, the Silent Ally American, and the Radicalized Hate-filled American.

I hope when my children are old enough to understand what this is all about, Pride month will be more about commemorating the fight and struggle in our country for the LGBT community. But something in the back of my mind knows that, this is but a fantasy. We have a lot of work to do.